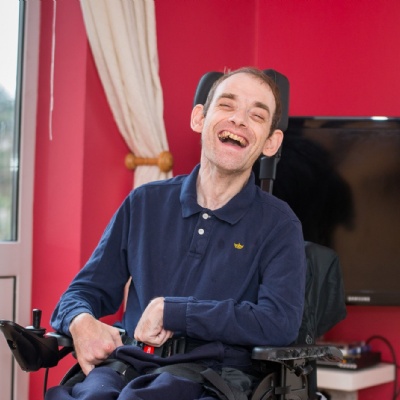 Stephen is a 48-year-old extrovert with a cheeky sense of humour who loves nothing more than socialising with friends and family and enjoying entertainment.

As a wheelchair user, living in one of Harpenden Mencap’s residential care flats, Stephen receives support to meet his busy schedule of activities and keep up with his interests and hobbies.

One of his weekly activities is attending choir practice, his big personality has made him the DJ for the group, which he truly enjoys!

When the first COVID-19 lockdown restrictions swept the nation, Stephen was relieved that his choir practice was still going to continue on video call, and that he wouldn’t miss out. 12-15 of his choir friends attended the rehearsals and the group even had one of their performances recorded.

The safety net of technology also continued for Stephen during lockdowns. He used his phone, tablet, and computer for video calls with his family members, such as his niece Laura.

A volunteer and friend of Stephen’s, Dave, was not able to see Stephen in person initially during lockdown, however he organised quizzes with him over WhatsApp call which gave him the fun time he needed whilst being an extrovert in isolation.

Stephen admits to being a bit old school and has a guilty pleasure of indulging in his DVD collection from time to time.

However, during lockdown Stephen was due a TV upgrade, and his new Smart TV can play YouTube videos on whilst also providing a better all-round entertainment experience, especially needed when he couldn’t leave his flat.

Over the years technology that Stephen used on a daily basis has developed significantly, giving him more comfort and independence, such as his wheelchairs, hoist and adjustable bed.

However, recently Stephen has branched into the world of using a voice controlled Smart Speaker. “I ask Alexa what the weather is like and to play the music I want to listen to” Stephen says.

This is life-changing for Stephen and gives him the choice and control he has not had before. He still requires support from his key worker Gary when using technology, which Stephen is happy with as he can relay to Gary what he wants to find out and buy in an instant.

The two look up the local rugby club fixtures, the football scores, make his Amazon purchases, book meals out and do some general browsing.

“By using technology, it is easier for Stephen to have input in decisions such as his shopping. It can be hard to involve him in the same way when we are out and about.”

If Stephen could have one complaint about technology, it would be the Wi-Fi signal!

We all know how frustrating it can be when technology slows down, including Alexa: “Sometimes she’s having a sleep!” Stephen refers to his Smart Speaker’s occasional lack of response.

Jokes aside, Wi-Fi strength dipping in and out, particularly during video calls to his doctor was not ideal for Stephen, however he was grateful for his GP’s patience.

Technology is always advancing and improvements such as upgrading the Wi-Fi sometimes need to be made to give people like Stephen choice and control over their environment.

Using voice control smart technology is very enriching for Stephen and the opportunities it could bring in the future will be life changing.

Stephen would love the opportunity to have his own diary digitalised and accessed by voice control, so he can be more independent and not need to call to staff to find out what he is doing that day, as a busy person, he loses track!